Chapter 2 focuses on various forms of contamination and potential consequences of these contaminations. Before studying and obtaining a food handler’s card, food workers must thoroughly understand the sources and types of contamination. If you work in Washington, Oregon, California, Illinois, Alaska, Florida and Utah, you are required to receive a Food Handler’s Card. Several other states, such as Texas, Oklahoma, Montana, Nevada and New York, carry county requirements for passing the food handler’s test.

• Contamination can happen in many places
• Contaminants can cause food-borne illness or result in physical injury
• Contaminants are found in the animals we use for food, the air, water, dirt, and occur naturally in food, such as bones in fish
• Food can be contaminated on purpose
• Most food is contaminated accidentally
• Examples of accidental contamination include: food handlers who don’t wash their hands after using the restroom, and then contaminate food and surfaces with feces from their finger; food handlers who pass contaminants through illness

Food-borne Infections can result when a person eats food-containing pathogens, which then grow in the intestines and cause illness.

Food-borne Intoxication result when a person eats food-containing toxins (poison) produced by pathogens found on the food or which are results of chemical contamination. Typically symptoms appear quickly, within a few hours.

Bacteria are of the greatest concern of the biological contaminates. Bacteria are found everywhere and under favorable conditions, they can reproduce very rapidly if FAT TOM conditions are right.

The acronym FAT TOM stands for:
Food – Most bacteria need nutrients to survive. TCS food supports the growth of bacteria better than other types of food.
Acidity – Bacteria grow best in food that contains little or no acid on a pH Scale that ranges from 0 to 14.0 acid to alkaline. Bacteria grown right in the middle more rapidly – 4.6pH – 7.5pH.
Temperature – Bacteria grow rapidly between 41˚F and 135˚F (5˚C and 57˚C). This range is known as the temperature danger zone. Bacteria growth is limited when food is held above or below the temperature danger zone.
Time – Bacteria need time to grow. The more time bacteria spend in the temperature danger zone, the greater chance they have to grow to unsafe levels. Bacteria doubles every 20 minutes in the TDZ.
Oxygen – Some bacteria need oxygen to grow, while others grow when oxygen isn’t there (ROP).
Moisture – The amount of moisture available in food is called water activity (aw). The aw scale ranges from 0.0 to 1.0. The higher the value, the more available moisture in the food.

Time & Temperature are the easiest thing for us to control. 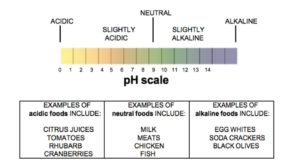 The FDA has identified three types of bacteria that cause severe illness and are highly contagious.
Salmonella Typhio

Viruses are the smallest of the microbial contaminants. While a virus cannot reproduce in the food, once consumed it will cause illness. Viruses are spread from PERSON TO PERSON, PERSON TO FOOD, AND PERSON TO FOOD CONTACT SURFACES. Practicing good personal hygiene and minimizing bare-hand contact with ready-to-eat food can help defend against viral food-borne illnesses.

Location
• Carried by human beings and animals.
• Require a living host to grow
• Do not grow in food
• Can be transferred through food and remain infectious in food
Sources
• Food, water, or any contaminated surface.
• Typically occur through fecal-oral routes.
Destruction
• Not destroyed by normal cooking temperatures.
• Good personal hygiene must be practiced when handling food and food-contact surfaces.
• Quick removal and cleanup of vomit is important

Food handlers diagnosed with an illness from Hepatitis A or Norovirus must not work in an
operation while they are sick.

Parasites are organisms that need a living host to survive. Proper cooking and freezing kills parasites.

Location
• Require a host to live and reproduce
Source
• Seafood, wild game, and food processed with contaminated water, such as produce
Prevention
• Purchase food from approved, reputable suppliers
• Cook food to required minimum internal temperatures
• Fish that will be served raw or under-cooked, must be frozen correctly by the manufacturer

Fungi, such as molds and yeast are generally responsible for spoiling food and rarely cause illness. They can grow in almost any condition but grow well in acidic foods. Some molds, however can produce harmful toxins. Yeasts can spoil food rapidly and will produce a smell or taste of alcohol. Foods spoiled by yeast should also be discarded.

Yeasts, Molds, and Mushrooms
• Some molds and mushrooms produce toxins
• Throw out moldy food, unless mold is a natural part of the food
• Purchase mushrooms from approved, reputable suppliers

Purchase fish from Approved Suppliers since cooking or freezing cannot destroy these toxins.

Produce – All produce should be purchased from an approved supplier. This will prevent illnesses associated with wild mushrooms, and produce that has been contaminated with sewage or chemicals.

Chemical Contaminants can come from a wide variety of substances including toxic metals, pesticides, cleaning products, sanitizers, lubricants, first aid and personal care products. To prevent contamination, such as lead in a pewter pitcher, use only approved food-grade utensils & equipment to prepare and store food. If carbonated-beverage dispensers are installed improperly, and carbonated water is allowed to flow back into the copper supply lines, it could leach copper from the line and contaminate the beverage. Only allow a licensed professional to apply pesticides.

Symptoms
• Vary depending on chemical consumed
• Most illnesses occur within minutes
• Vomiting and diarrhea are typical
Prevention
• Only use chemicals approved for use in food service operations.
• Purchase chemicals from approved reputable suppliers.
• Store chemicals away from prep areas, food-storage areas, and service areas.
• Chemicals must be separated from food and food-contact surfaces by spacing and partitioning.
• Chemicals must never be stored above food or food-contact surfaces.
• Use chemicals for their intended use and follow manufacturer’s directions.
• Only handle food with equipment and utensils approved for food service use.
• Make sure the manufacturer’s labels on original chemical containers are readable
• Keep MSDS current, and make sure they are accessible to staff at all times.
• Follow the manufacturer’s directions and local regulatory requirements when throwing out chemicals.

Food Security & Crisis Management addresses the prevention or elimination of the deliberate contamination of food. The key to protecting food is to make it as difficult as possible for tampering to occur by addressing all potential Human, Interior and Exterior elements in your operation

Use the FDA Defense Tool – A.L.E.R.T.
Assure Make sure products received are from safe sources
Look Monitor the security of products in the facility
Employees Know who is in your facility
Reports Keep information related to food defense accessible
Threat Develop a plan for responding to suspicious activity or a threat to the operation

An allergic reaction could include itching, tightening of the throat, wheezing, hives, swelling, diarrhea, vomiting, cramps, and loss of consciousness or even death. Managers and employees should be aware of the most common.

• A protein in a food or ingredient some people are sensitive to
• These proteins occur naturally
• When an enough of an allergen is eaten, an allergic reaction can occur

You and your employees should be able to inform customers of these and other potential food allergens that may be included in food served at your establishment.

To find out more about how to study and pass the food handler’s card test, visit our Study Guide & Practice Exam section to best prepare for the test.