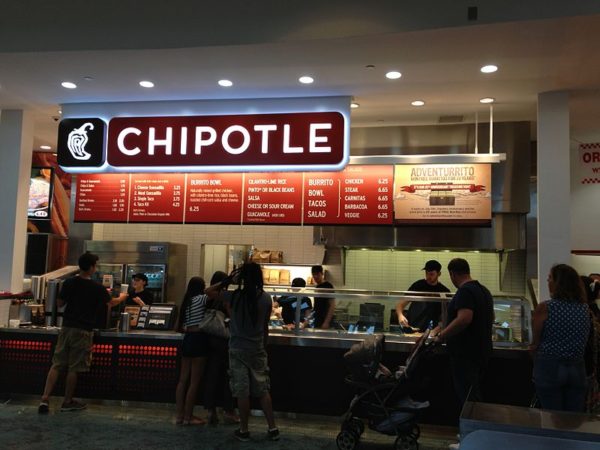 In the wake of E. coli cases where patrons of Chipotle, a popular Mexican fast casual restaurant, became sickened in multiple states, the company is taking measures to rebuild its brand and ensuring food handlers follow safe food handling practices. During the ordeal, customers reported salmonella, norovirus, and E. coli incidents in more than 14 states including Washington, California, Oregon, Massachusetts, and Delaware. Many states where Chipotle had outbreaks require workers to receive food handler’s card. State level requirements can be found in our state pages:

After the outbreaks, Chipotle’s sales decreased drastically as reflected in its stock price decrease from $749.12 to $413.29 over the course of several weeks. The company launched marketing campaigns to regain the customer’s trust with incentives ranging from free burritos to chips and guacamole.

In addition, Chipotle is investing in its effort to prevent future foodborne illness outbreaks. Part of the effort is food handling certification for restaurant managers. The company hopes to reduce incidents by educating its 50,000+ employees and managers on food handling best practices.

Following the outbreaks, Chipotle initially implemented food handling practices to separately prepare certain ingredients at a centrally located kitchen. However, they could not sustain the food quality as they moved away from each location preparing all the ingredients. Since then, they have hired a former FDA officer to assist in building its food safety system including a high powered water system to wash pathogens off chorizo. The company also implemented new protocol on handling ingredients, which includes barcoding ingredients at the supplier level to track and inspect each shipment from farm to restaurant. The company will also inspect each store more frequently to ensure food handlers are adhering to safety standards the company established. The company is ensuring these standards are followed by aligning the manager’s bonus incentives with passing the internal inspection.
Finally, Chipotle has a marketing plan to run digital ads to attract lost customers to their website and educate them about Chipotle’s improvements to prevent future foodborne illness outbreaks.